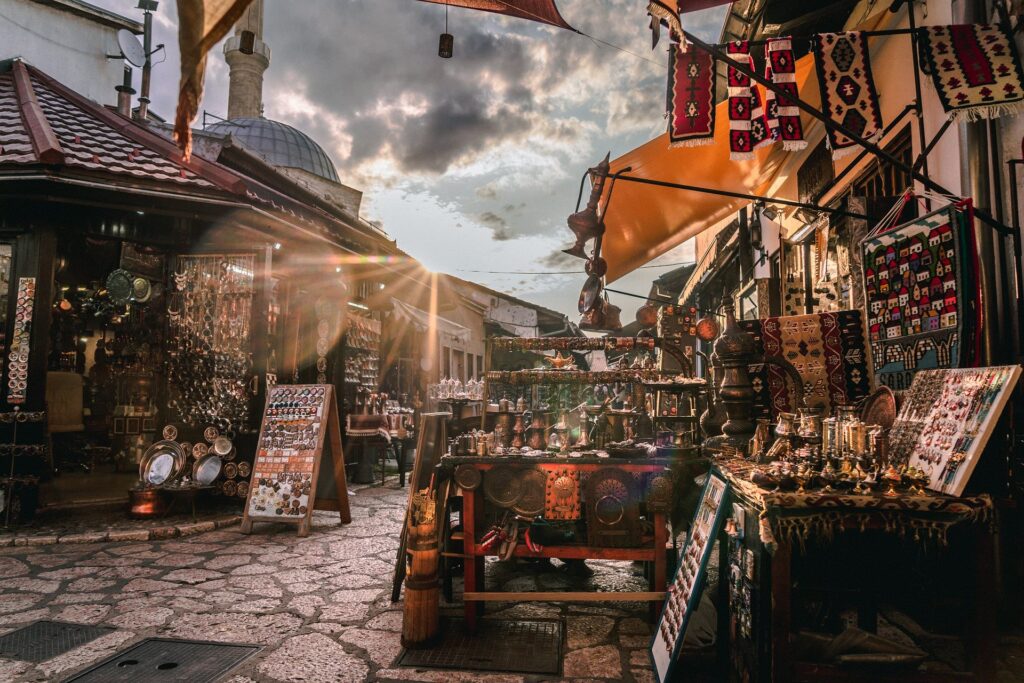 Sarajevo, the capital of Bosnia and Herzegovina.

The name – Sarajevo derives from the Turkish word “saray” meaning “a palace”. The city was founded in the fourteenth century by the Ottoman Empire. It lies right in the center of the most important historical events that have been taking place for more than a millennium. It was here where the Roman Empire separated into two parts – Western Roman Empire and Byzantine Empire. People of all faiths – Catholic, Orthodox, Muslim and Jews had coexisted here peacefully for centuries. Sarajevo was even called “European Jerusalem” due to this phenomenon.

In the nineteenth century Sarajevo was annexed by the Austria-Hungary Empire and during those times European architecture and style was introduced. It was also the time of great development in the city: Europe’s first electric tram network was launched here (second in the world, after San Francisco). Unfortunately, not a long time after, Sarajevo went down in history as the place where First World War began as a result of the assassination of Franz Ferdinand of Austria on the Latin Bridge.

After the Second World War Sarajevo became a part of Yugoslavia. The city enjoyed a moment of glory once more for a short time as the host of 1984 Winter Olympics. Bosnia had declared independence in the 1990s.

Strolling down the streets of the old town, you’ll get the impression that it was glued together from pieces that came from all parts of Europe and the Middle East: at one corner, you’ll think you’re in somewhere in the West, admiring Christian churches and a street later when you notice oriental stalls, bazaars and Ottoman Mosques, you’ll feel as if you were transported somewhere to the East.

Mostar is situated on the Neretva River and is the fifth-largest city in the country. Mostar was named after the bridge keepers (mostari) who in the medieval times guarded the Stari Most (Old Bridge) over the Neretva.

Mostar is one of the largest city in Hercegovina, with a small but thoroughly enchanting old town centre. At dusk the lights of numerous millhouse restaurants twinkle across gushing streams, narrow Kujundžiluk bustles joyously with trinket sellers and, in between, the Balkans’ most celebrated bridge forms a majestic stone arc between medieval towers.

Mostar is a truly “living fairy tale” town. The stone bridge, the cozy houses and the unreal, green river will transport you to a different, fantasy world. Mostar is very easy to get to, not so expensive and still considered off the beaten path. However, due to its tiny size, during the peak season, you may find it hard to believe as there are so many crowds everywhere that it’s difficult to squeeze through while walking down the narrow, little streets.

Mostar is extremely picturesque and it’s one of those many amazingly charming towns you must see in the Balkans. 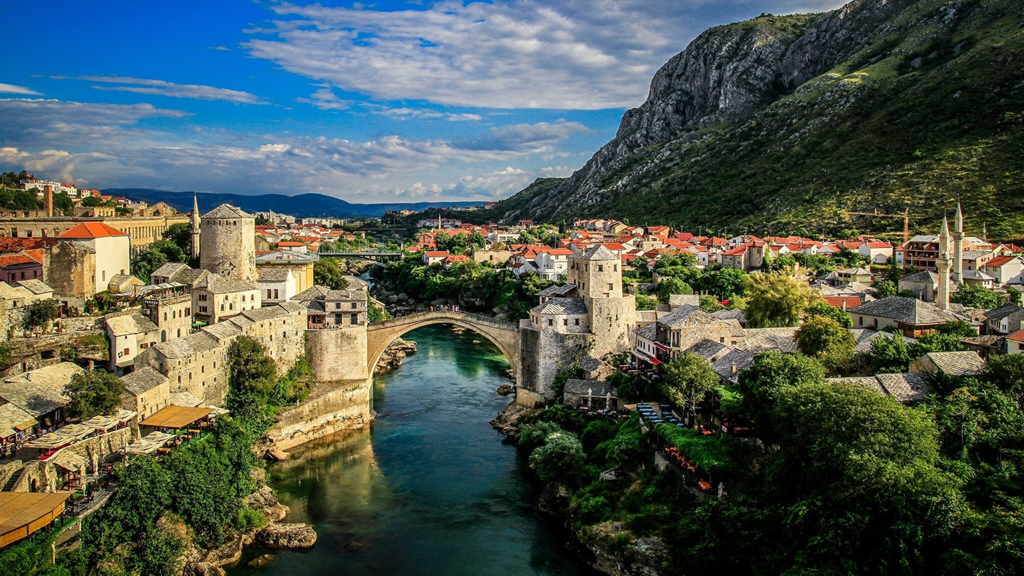 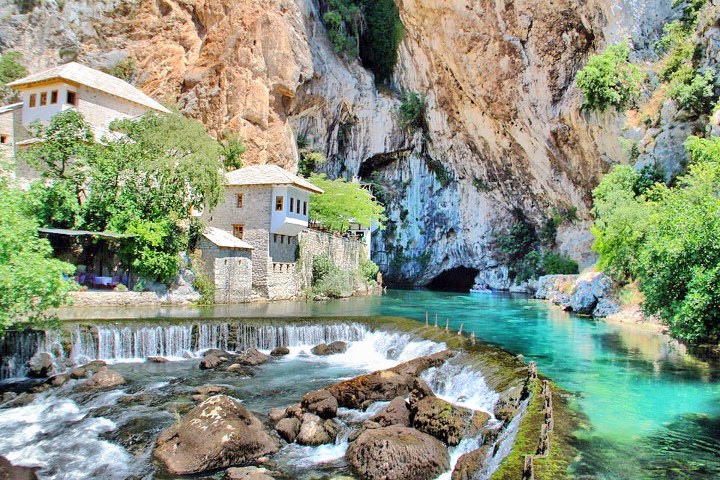 This is one of the best examples of the interconnectedness of Herzegovina’s cultural and natural heritage. Atop the mountain in Blagaj are the ruins of an ancient Illyrian fortification. The Romans added to the original structure, and by the Middle Ages it had become the castle of the ruling noble family of Hum. The Ottomans added even more to the large fort and the ruins stand witness to four civilisations that have at one time or another made Herzegovina their home. The tekija dervish house built at the base of a 200m rock face at the source of the Buna River is a magical place, blessed with the powers of both humans and nature.

The residents of the Krajina treat the Una and Vrbas rivers like members of the family. They are the best-cared-for rivers in the country and many of the regional traditions revolve around (and on) these gorgeous rivers. Rafting or kayaking on the Una and Vrbas is an unforgettable experience and if you tackle the falls at Strbački Buk, you’ve conquered some of the toughest in Europe! Strbački waterfall is 24m high. 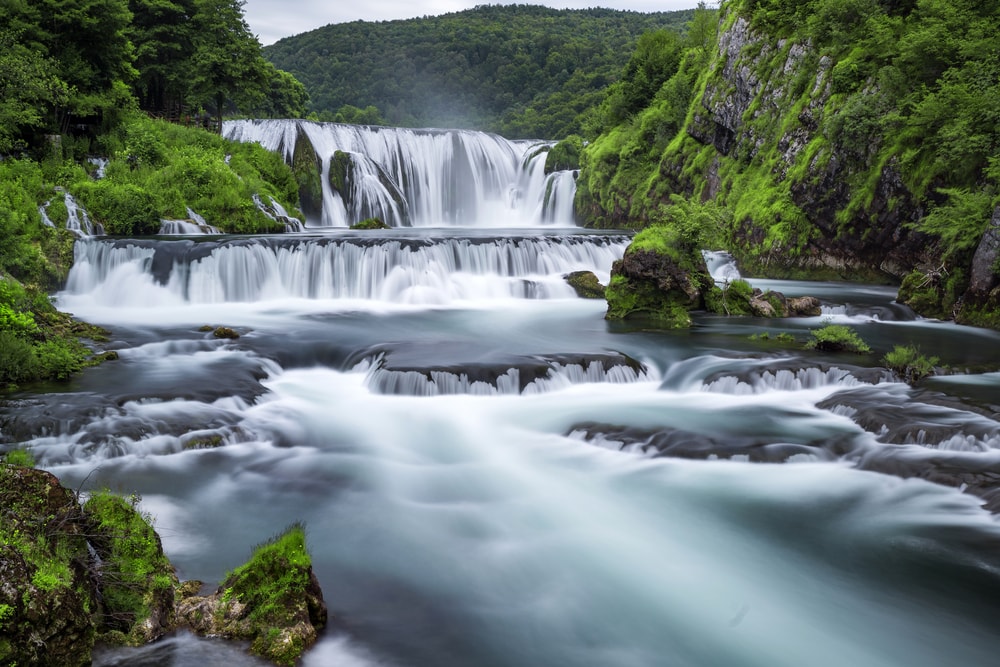 The unique settlement of Pocitelj, on the UNESCO World Heritage List has recently restored its former appearance. In addition to its extraordinary oriental architecture, with its construction dating back to 400 years of Ottoman rule, Počitelj today encompasses the oldest art colony of Southeast Europe. Artists from all over the world gather in Počitelj on cultural themes, but also because of the splendid and delicious red pomegranates and figs, which are abundant on the slopes around Počitelj. The Hajji-Alija mosque from the first half of the 16th century was rebuilt, as was the Sisman-Ibrahim Pasha madrasah and the House of Gavran Kapetanović, which are all open for visitation. The most interesting building in Počitelj is the Clock Tower, a circular fortress that rises from the top of the hill above this beautiful city, next to which is a hamam (public bathroom). There was an observation post and an army in the clock of Počitelj’s tower, which guarded the city from possible attack by the Neretva valley. In addition to the hamas in Počitelj, there was a khan – a caravan resting place, which houses a renovated well-known restaurant. Numerous well-preserved historic buildings and unique atmosphere make Počitelj a museum town. Today, a small and predominantly older population lives in Počitelj. They are mostly descendants of the first inhabitants of this medieval town, and among them are descendants of the Dizdar family, which was founded within the walls of Počitelj five centuries ago, and whose continuity has been maintained to this day.

Due to its unique features and preserved architecture, Počitelj is one of the most interesting attractions of Bosnia and Herzegovina, visited by numerous tourists from all over the world. Beautiful surroundings with rich vineyards and numerous wineries allow visitors to enjoy the famous wines of Herzegovina. Žilavka is a premium white dry wine produced from the Žilavka grape variety, which is grown on the vineyards of Čapljina and Domanović, in Mostar’s vineyard in Bosnia and Herzegovina.