Bulgaria is a country in Southeastern Europe. It is bordered by Romania to the north, Serbia and North Macedonia to the west, Greece and Turkey to the south, and the Black Sea to the east. The capital and largest city is Sofia, other major cities are Plovdiv, Varna and Burgas. With a territory of 110,994 square kilometres Bulgaria is Europe’s sixteenth-largest country.

Bulgaria occupies a portion of the eastern Balkan peninsula. The land borders have a total length of 1,808 kilometres, and the coastline has a length of 354 kilometres . Its total area of 110,994 square kilometres ranks it as the world’s 105th-largest country. The most notable topographical features are the Danubian Plain, the Balkan Mountains, the Thracian Plain, and the Rila-Rhodope massif.The southern edge of the Danubian Plain slopes upward into the foothills of the Balkans, while the Danube defines the border with Romania. The Thracian Plain is roughly triangular, beginning southeast of Sofia and broadening as it reaches the Black Sea coast. 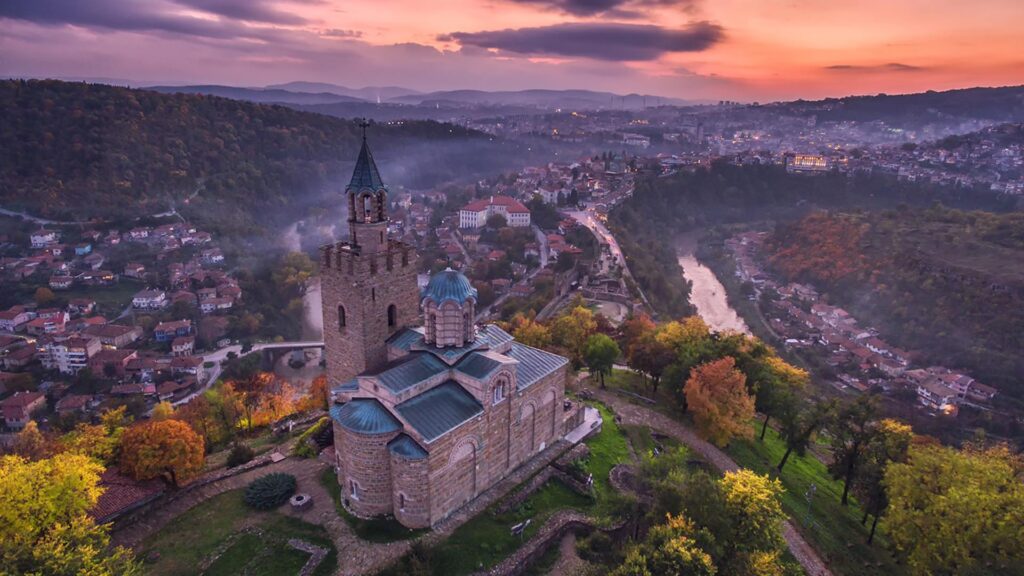 The Balkan mountains run laterally through the middle of the country from west to east. The mountainous southwest has two distinct alpine type ranges – Rila and Pirin, which border the lower but more extensive Rhodope Mountains to the east, and various medium altitude mountains to west, northwest and south, like Vitosha, Osogovo and Belasitsa. Musala, at 2,925 metres is the highest point in both Bulgaria and the Balkan peninsula. The Black Sea coast is the country’s lowest point. Plains occupy about one third of the territory, while plateaux and hills occupy 41%. Most rivers are short and with low water levels. The longest river located solely in Bulgarian territory, the Iskar, has a length of 368 kilometres. The Struma and the Maritsa are two major rivers in the south.

Contemporary Bulgarian culture blends the formal culture that helped forge a national consciousness towards the end of Ottoman rule with millennia-old folk traditions. An essential element of Bulgarian folklore is fire, used to banish evil spirits and illnesses. Many of these are personified as witches, whereas other creatures like zmey and samodiva (veela) are either benevolent guardians or ambivalent tricksters. Some rituals against evil spirits have survived and are still practised, most notably kukeri and survakari. Martenitsa is also widely celebrated.Nestinarstvo, a ritual fire-dance of Thracian origin, is included in the list of UNESCO Intangible Cultural Heritage.

Nine historical and natural objects are UNESCO World Heritage Sites: Pirin National Park, Sreburna Nature Reserve, the Madara Rider, the Thracian tombs in Sveshtari and Kazanlak, the Rila Monastery, the Boyana Church, the Rock-hewn Churches of Ivanovo and the ancient city of Nesebar. The Rila Monastery was established by Saint John of Rila, Bulgaria’s patron saint, whose life has been the subject of numerous literary accounts since Medieval times.

is the capital and largest city of the Republic of Bulgaria and the seat of two districts, the city of Sofia and the Sofia region. It is located in the western part of the country, in the Sofia field, which is surrounded by the mountains of Vitosha in the south, Ljulin in the west and Stara planina in the north. Sofia is one of the oldest cities in Europe and its history can be traced back some 7000 years.  Declared a capital in 1879, Sofia is the largest city of the Republic of Bulgaria (BG), with 1.6 million permanent citizens and residents of about 2 million.

It is creative city.

Sofia is home to a wide variety of cultural enterprises and an active service sector focusing on the film industry. Many professional organizations bringing together film directors and producers are also based in Sofia. The municipality of Sofia has therefore decided to target the expansion of the film industry as a strategic factor for the city’s sustainable development, with special focus being given to the stabilization and growth of small cultural enterprises. Over the past eighteen years, the Sofia Film Festival has emerged to become the Balkans’ largest and most important film festival.

Sofia is famous for its mineral water springs, and some of them have been turned into drinking fountains where you can drink mineral water for free.

is the highest mountain range of Bulgaria and the Balkan Peninsula. It is situated in southwestern Bulgaria and forms part of the Rila–Rhodope Massif. The highest summit is Musala at an altitude of 2,925 m which makes Rila the sixth highest mountain range in Europe after the Caucasus, the Alps, Sierra Nevada, the Pyrenees and Mount Etna, and the highest one between the Alps and the Caucasus. Some of the Balkans’ longest and deepest rivers originate from Rila, including the Maritsa, Iskar and Mesta rivers. Bulgaria’s main water divide separating the Black Sea and the Aegean Sea drainage systems follows the main ridge of Rila. The mountain range is dotted with almost 200 glacial lakes such as the renowned Seven Rila Lakes, and is rich in hot springs in the fault areas at the foothills, including the hottest spring in South-eastern Europe in Sapareva Banya.

On the slopes of the Rila and at its foot there are many cultural and historical monuments and tourist attractions, and one of the most famous is the Rila Monastery.