Portugal, officially the Portuguese Republic, a country lying along the Atlantic coast of the Iberian Peninsula in southwestern Europe. Once continental Europe’s greatest power, Portugal shares commonalities — geographic and cultural — with countries in both northern Europe and the Mediterranean. Its cold, rocky northern coast and mountainous interior are sparsely settled, scenic, and wild, while the Algarve’s countryside is warm and fertile. The rugged Estrela Mountains (Serra da Estrela, or “Star Mountain Range”), which lies between the Tagus and Mondego rivers, contain the highest point of mainland Portugal.

With Spanish Galicia, northern Portugal comprises the mountainous border of the Meseta (the block of ancient rock that forms the core of the Iberian Peninsula), southern Portugal also contains extensive areas of limestone and other sedimentary strata, mostly plateaus or plains.

is the capital and largest city of Portugal. It is located in the western part of the country, on the Atlantic coast, and is also the westernmost city in Europe. It covers an area of ​​83, 84 square kilometers and has a population of about 545,000. Lisbon is the political, economic, cultural, and tourist center of Portugal. Some of the city sights are on the UNESCO World Heritage List.

Lisbon was inhabited in prehistoric times. The settlement was founded by the Phoenicians around 1200 BCE. After the victory over the Carthaginians, this region was occupied by the Romans. The settlement was then called Olisipo. At the beginning of the Middle Ages, Roman rule began to melt in the Iberian Peninsula, and the Alans and the Saints, then the Viziogts, and finally the Moors, entered the city. The Moorish period of rule over Lisbon lasted from 711 to 1147, when it was returned to power by Christians. It was proclaimed the capital of Portugal in 1255, and then the city began to develop intensively. The famous Portuguese naval expeditions set off from Lisbon to discover a new world. Not only that, large quantities of gold were coming to the port of Lisbon, which made the city and Portugal very rich. Period of Spanish rule over Portugal from 1580-1640. It significantly slowed down the development of Lisbon. The 1755 earthquake destroyed 85% of the city, killing between 60 and 90 thousand people. the beginning of the nineteenth century brought new anguish. The city was occupied by the Turps of the French Emperor Napoleon. The late nineteenth and early twentieth centuries were very dramatic for Lisbon. The political crisis culminated in 1910, when the King of Portugal was replaced. The city was not damaged during the world wars, although Portuguese dictator Antonio Salazar was in Lisbon. In recent decades, Lisbon has developed into a very modern city and in 1994 was proclaimed the European Capital of Culture.

Lisbon is the most popular destination on the map of Portugal. This is a city of many sights and great fun. 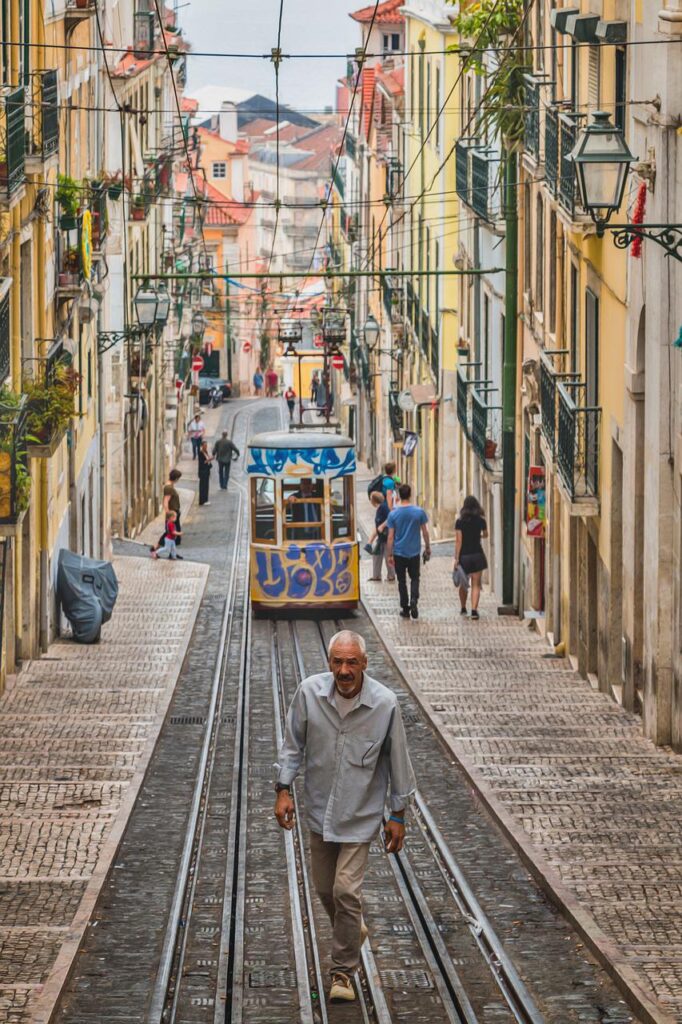 was probably built in the eleventh century, during the reign of the Moors. The city was conquered by the first Portuguese king, Alfonso I, by throwing one of the knights, Martim Moniz, off his horse and preventing the defenders from closing the door. He remained pinned down long enough for the other soldiers to reach the gate. The castle has long served as a royal palace, and since the sixteenth century the process of neglect began. Today the castle is one of the biggest attractions of Lisbon.

crosses the Tejo River and was built in 1966. It is 17 kilometers long, making it the longest European bridge. It is designed to withstand catastrophic earthquakes like the one from 1755. The bridge offers magnificent views of the city's coastline.

is one of the world's best aquariums. This is a building surrounded by water, which can be accessed via a bridge. The aquarium was created with the idea of ​​representing independent parts of the ocean, making the centerpiece the largest, and surrounded on four sides by smaller aquariums. The largest aquarium mimics global ocean conditions, while others include the North Atlantic, Antarctica, the warm Pacific, and the tropical Indian Ocean. The aquarium houses over 500 species and about 8000 animals, housed in seven million liters of fresh water.

is one of the biggest landmarks in Portugal. It was built in the early sixteenth century, and served to defend the city. Apparently it did not serve well, as Portugal fell under Spanish rule as early as 1580. After that it served as a prison, and it held that post for centuries. It is decorated with very interesting details related to the history of Portugal.

There used to be a church on the site of the monastery where Vasco da Gama prayed before discovering India. This made the monastery a symbol of navigation and discovery. It has been disgusted for some hundred years in the Renaissance style. The monastery has a concocted recipe for the famous Portuguese pasteis de Belema. Today it houses the Maritime Museum and the National Archaeological Museum.

Porto, also known as Oporto in some languages is the second-largest city in Portugal, one of the Iberian Peninsula’s major urban areas. Porto city has a population of 237,559 and a metropolitan area with 2.4 million people in an area of 2,395 km2 making it the second-largest urban area in Portugal. Located along the Douro River estuary in northern Portugal, Porto is one of the oldest European centres, and its core was proclaimed a World Heritage Site by UNESCO in 1996, as “Historic Centre of Oporto, Luiz I Bridge and Monastery of Serra do Pilar”. The historic area is also a National Monument of Portugal. The western part of its urban area extends to the coastline of the Atlantic Ocean. Its settlement dates back many centuries, when it was an outpost of the Roman Empire. Its combined Celtic-Latin name, Portus Cale, has been referred to as the origin of the name Portugal, based on transliteration and oral evolution from Latin. In Portuguese, the name of the city includes a definite article: o Porto (“the port”), which is where its former English name “Oporto” comes from.

The most spectacular attraction near Porto is the Douro Valley, where wine has been produced for centuries. Considered a UNESCO World Heritage Site, the best way to enjoy its scenic views is by taking one of the many daily river cruises. On the banks of the Douro River you can find several traditional wineries where you can taste port wine. They are located in Vila Nova de Gaia.

One of the oldest cities in Europe, its maze of steep and narrow cobbled streets is home to beautiful plazas, churches and houses with colourfully tiled façades.

Porto is quintessential small European city. It has colorful buildings, narrow winding streets lined with cafés, castles, historic churches, and plenty of wine. Porto is small, walkable, and heavy on the charm. It is the perfect place to unwind