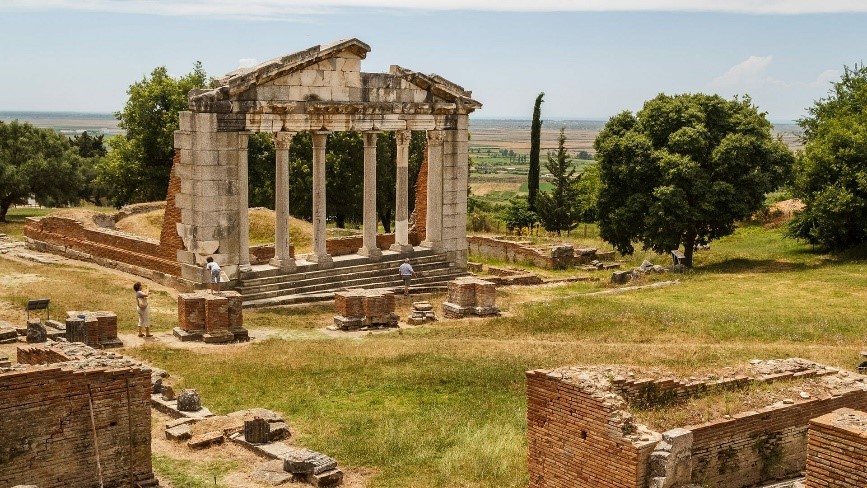 Albania is a fascinating, Mediterranean country situated just north of mainland Greece with an incredible history set impressively against a wild and rugged landscape.

Past civilisations have left their mark, mainly the Romans and Byzantines, which we see at the UNESCO World Heritage Sites of Butrint and the famous Berat Fortress, but the real highlight is the warm hospitality received all over this wonderfully undiscovered country.

Albania is bounded by Montenegro to the northwest, Kosovo to the northeast, North Macedonia to the east, Greece to the southeast and south, and the Adriatic and Ionian seas to the west and southwest, respectively.

Albania’s immediate western neighbour, Italy, lies some 80 km across the Adriatic Sea. Albania has a length of about 340 km and a width of about 150 km. 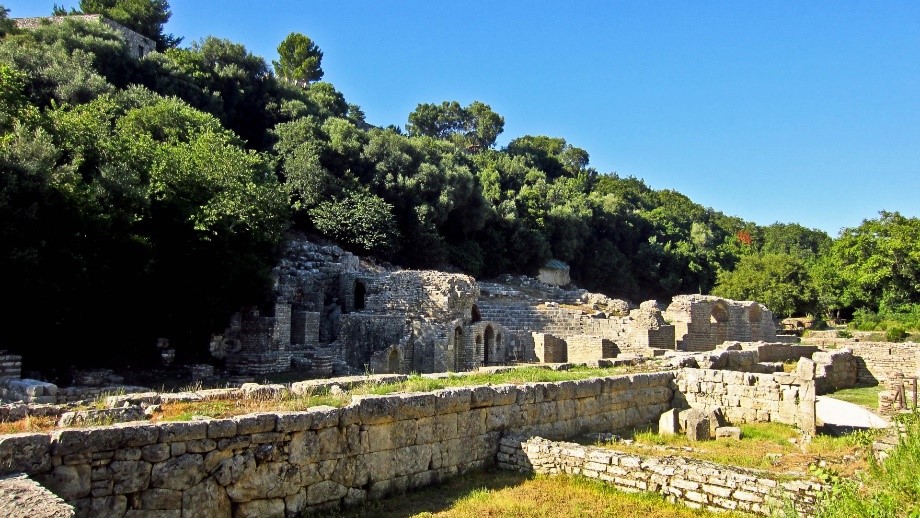 Plains and plateaus extend in the west along the Albanian Adriatic and Ionian Sea Coast.

(Albanian Tiranë), capital of Albania. It lies 27 km east of the Adriatic Sea coast and along the Ishm River, at the end of a fertile plain.

It was founded in the early 17th century by a Turkish general, Barkinzade Süleyman Paşa, who is said to have built a mosque, a bathhouse, and a bakery in order to attract settlement. The town gradually became a trading centre at a junction of roads and caravan trails. It was chosen to be the capital of Albania in 1920 by a congress at Lushnjë.
Under King Zog I (reigned 1928–39), Italian architects were employed to replan the city. The focus is Skanderbeg Square, whose Etehem Bey Mosque (1819) is now flanked by the Soviet-built Palace of Culture.

Nearby is the University of Tirana (1957). The old city stretches to the east and north of the main square and features alehouses and historic architecture.

Tirana has museums, a national institute of folklore, a national theatre, and a concert hall. Skanderbeg Square has a large statue of Skanderbeg (Gjergj Kastrioti), the Albanian national hero. The inhabitants of Tirana are mostly Muslim.

Inhabited since prehistoric times, Butrint has been the site of a Greek colony, a Roman city and a bishopric. Following a period of prosperity under Byzantine administration, then a brief occupation by the Venetians, the city was abandoned in the late Middle Ages after marshes formed in the area.

The present archaeological site is a repository of ruins representing each period in the city’s development. Since 1992 it is on the UNESCO’s list of protected world heritage monuments.

This old city is located 120 km from Tirana. The city’s life began in the 6th-5th century B.C. as an Illyrian settlement. Later, in the 3rd century B.C., it was turned into a castle city known as Antipatrea.

The castle expanded afterwards, particularly during the feudal dominion of the Muzakaj family. Inside the castle, they built churches with valuable frescoes and icons, and also a calligraphy school.

Uniquely today, residents still live inside of the castle walls. The three major neighborhoods of the old city are Mangalemi, Gorica, and Kala, where the castle itself is located. Berat is 2400 years old Museum city and pride of Albanian architecure. It is also under the protection of UNESCO World Heritage. 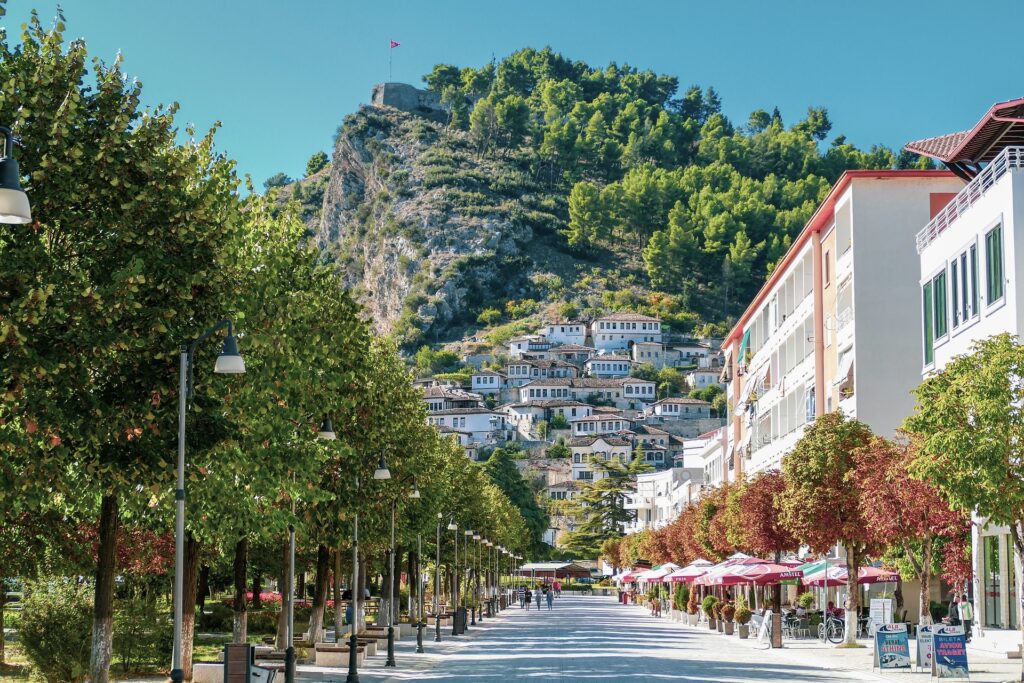 Gjirokastra is in the south of Albania, situated on the east face of the steep Mali i Gjerë mountain range. It lies 232 km from Tirana, the capital of Albania; 31 kilometres from the Greek border crossing at Kakavia; and 56 kilometres from Saranda, the seaport that connects southern Albania to Corfu. Gjirokastra is known as city of stone. The origin of the city starts with the castle of Gjirokastra, built in IV century AD. The city was named Argyrokastro, in 1336. In 1417, it was conquered by the Ottoman army. The city reached its peak over 1800-1830, when monumental assembly houses were built. The first neighborhoods are those of Bazaar and Hazmurate.

The main characteristic of Gjirokastra is the intensive use of stone in building the houses, which look like small fortresses, the streets of cobblestone, which all lead to Bazaar. Due to all these features, Gjirokastra is also known as the “The Stone City”.

Apollonia was an ancient Greek colony city and former bishopric in Illyria , located on the right bank of the Aous river (modern-day Vjosa). Its ruins are situated in the Fier region, near the village of Pojani (Polina), in modern-day Albania.

The ancient city of Apollonia is situated in southwestern Albania, about 13 miles from the city of Fier. The fascinating landscape of the archeological park, which has been preserved in an exceptionally intact condition, comprises a successful combination between the beauty of monuments and nature, attractive through its long history, in an atmosphere of relaxation and meditation. This archaeologic park or site contain also a Museum of Archaeology that is situated at the old Monastery of Saint Mary . 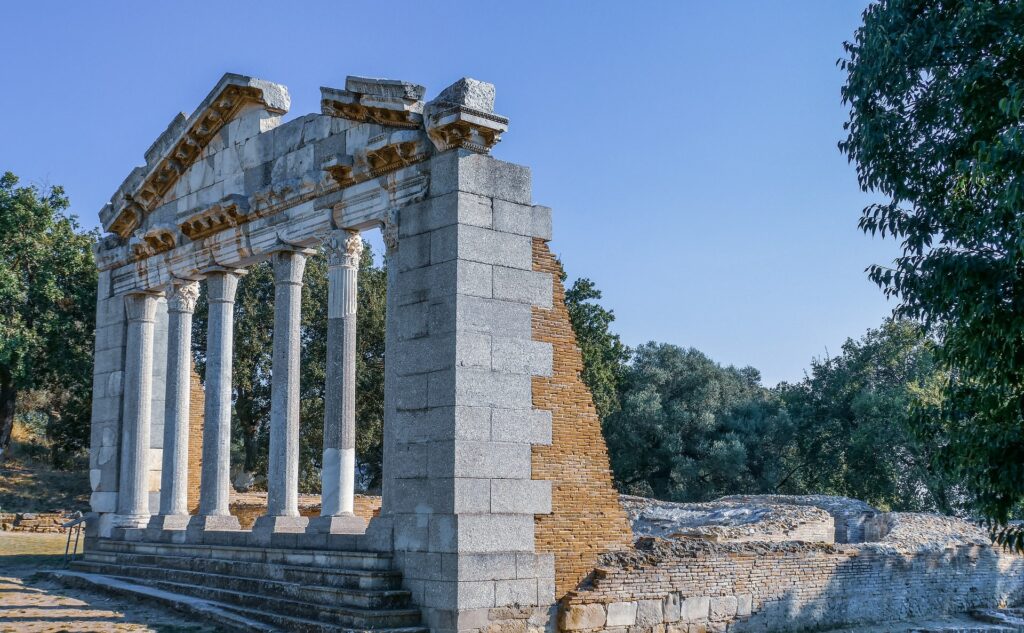 The Albanian Alps are one of the most attractive and fascinating areas in the country. Their natural beauty and unique values can be regarded as a hidden treasure. There are many different wild animals such as bears, lynx and wolves. The area’s climate and specific weather conditions have resulted in the existence of a number of endemic plant species, making the mountains a fascinating destination for hikers. In terms of freshwater ecosystems, the Albanian Alps are also the most water rich areas in the Mediterranean.

The Albanian Alps are located in northern Albania and cover around 8 percent of the country’s territory. They lie north of the Drini River valley, and west of the lower stretch of the Valbona River. They are geographically isolated, with few road links to neighbouring countries or to the rest of Albania. The Alps are the highest, most impenetrable and most rugged mountain massif in the country. The highest peaks in the central Alps exceed 2,000 m, while the lowest points on the outskirts of the range reach between 50 and 300 m in height and offer a panoramic view of the zigzagging peaks that loom above.