Located on a major route between Turkey in the Middle East and Europe, Serbia (Srbija) has a long and complex history spanning thousands of years and countless foreign invasions. The Illyrians were supplanted by the Celts in 4th century BC, followed by the arrival of the Romans a century later, then the Slavs occupied much of the Balkan Peninsula in the 6th century AD. Turks arrived in the 14th century and settled for the next 500 years. The Ottoman Empire began to decay in the 19th century. After the assassination of Austrian Archduke Francis Ferdinand in 1914 in Sarajevo, Serbia was invaded and World War I began. In 1918 Croatia and Slovenia joined the Kingdom of Serbs, Croats and Slovenes and the group of nations was renamed Yugoslavia in 1929.

Belgrade is the capital and most populous city of the Republic of Serbia and the economic, cultural, scientific and educational center of the country. The city lies at the mouth of the Sava River into the Danube, where the Pannonian Plain joins the Balkan Peninsula.

It is one of the oldest cities in Europe and has since ancient times been an important focal point for traffic, an intersection of the roads of Eastern and Western Europe.

Belgrade is old town dated form age of romans and even before. The urban area of the City of Belgrade has a population of 1.200.000. Many kingdoms and states ruled this area and brought their culture to Belgrade. Belgrade was long border of Ottoman Empire and Habsburg Monarchy, border of Christianity and Islam.

That brought the fact that Belgrade has wildly varying architecture. The oldest architecture is found in Kalemegdan Park. Outside of Kalemegdan, the oldest buildings date only from the 18th century, due to its geographic position and frequent wars and destructions.

With Serbia being located at the crossroads between East and West, its cuisine has gathered elements from different cooking styles across the Middle East and Europe.

Belgrade is well known for sport, art, history, but Belgrade nightlife is one more thing for which Belgrade can be proud of. Attractive destinations, wild parties that last whole night long are Serbian capital city’s brand. The most recognizable nightlife features of Belgrade are the barges “splav”, spread along the banks of the Sava and Danube Rivers Belgrade is known as one of the most fun cities in Europe.

Sremski Karlovci town is located about 15 km from Novi Sad, at the foot of the mountain of Fruska Gora on the right bank of the Danube.

Sremski Karlovci represents a true city museum, where despite all the tumultuous events that have occurred here, cultural and historical monuments which are very important for the history of Serbian people, have been preserved. Since ancient times Sremski Karlovci had been a center of Serbian culture and spirituality. The first Serbian high school and the first Serbian Orthodox Seminary had been are established there.

In a place that reminds us of times long gone, is a preserved baroque old town core, which had been built in the period from the seventeenth to the twentieth century.

Serbia’s second largest city.  This attractive university city on the Danube is also the 2019 European Youth Capital. It’s good practice for when Novi Sad becomes the first non-EU city to take over as European Capital of Culture in 2021.

It’s not hard to spot the Habsburgs’ legacy in this former corner of the Austro-Hungarian empire – Baroque pastel-coloured townhouses line Novi Sad’s stately streets and squares, particularly in the pedestrianised centre. With so many café terraces filling the car-free thoroughfares, inviting you to stop for coffee and palačinke (Serbian pancakes), it’s no surprise that the pace here is alluringly unhurried.

Looming over the Danube’s right bank is Petrovaradin Fortress – “ Gibraltar on the Danube”, the last Medival Austrian fortress, built by the Austrians from 1692 to 1780 to ward off further attacks by the Turks. At one time the vast network of underground galleries was used as a prison, but you can now tour them with a guide. Above ground is the Novi Sad Museum, chronicling the city’s history, and the fortress’ extensive grounds are the setting for the Exit Festival. The fortress becomes a massive party in the summer thanks to the famous EXIT Festival. 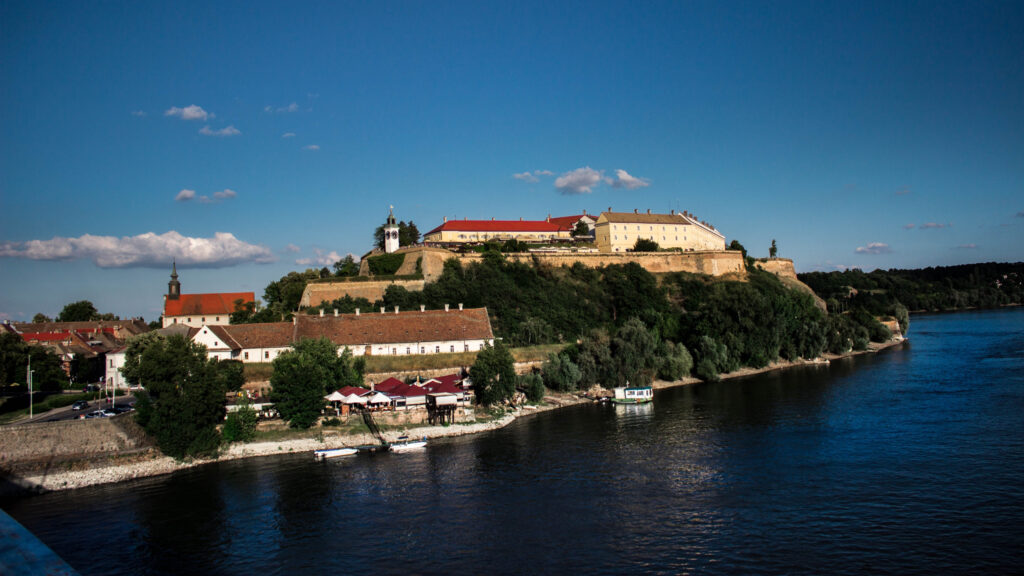 The hill of Oplenac is situated in the heart of the Serbia`a picturesque Sumadija region and it represents foundation of the modern Serbian State. On its peak, stands a unique monument of the Serbian cultural and historical heritage – the Church of Saint George. A white marbled five-domed mausoleum of the Karadjordjevic dynasty, decorated with impressive mosaics in 15,000 nuances, depicting biblical scenes copied from medieval frescoes from more than 70 Serbian Orthodox Monasteries.

Oplenac is also home to the ‘Triumph’ white wine, once produced exclusively for King Aleksandar Karadjordjevic, according to the original recipe of German winemakers. Visit to the Karadjordjevic Complex at hill of Oplenac includes: St. George Church, Peter`s House (family Karadjordjevic mausoleum), King and Queen`s House, Karadjordje City with historical exhibition, Gallery in the Winegrower House.

The Žiča monastery, first seat of the Serbian Orthodox Church, in 2019 celebrating 800 years of existence since its foundation. Lunch in the restaurant on the way back to the Belgrade airport.

One of the most beautiful Orthodox monasteries in Serbia.

The Zica monastery is magnificent, more like a castle with his walls around and lovely churches inside the walls. It was built at 1205-1208 by the first King of Serbia – Stephan II Nemanjic, who was later crowned in this monastery as and the first Head of the Serbian Church, Saint Sava. Before him the Serbian Grand Princes had been called Veliki Župan, something like king of Serbia and Byzantine prince. 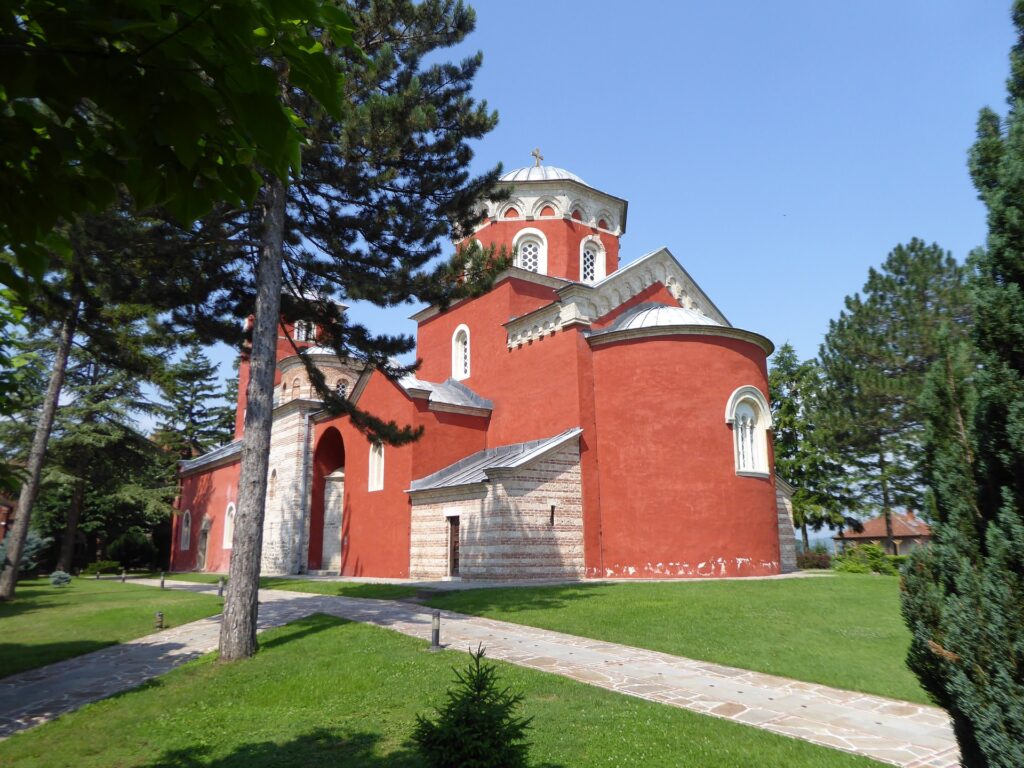 Tall stone formations of Devil’s Town that are actually a group of petrified wedding guests, or at least that is what a legend tells, were nominated for one of the New Seven Wonders of Nature.

Whether petrified wedding guests who, on devil’s orders wanted to marry a brother and sister, or people petrified by the witch as they fulfilled their promise; high stone formations on mount Radan in the south of Serbia will leave you indifferent. A rare natural phenomenon, Đavolja Varos.

It is located in Southern Serbia, on the mount Radan not far from the town of Kursumlija. It contains more than 200 stone formations, 2 to 15 meters high and up to 3 meters wide, with strange stone caps.

The village is located at 660 to 700 meters above sea level. This unusual and mystic place, which very name will chill your bones, contains two plains with ominous names – Devil’s (Hell’s) and Hell (Hell’s).