Kosovo is bordered by Serbia to the north and east, North Macedonia to the south, Albania to the west, and Montenegro to the northwest. Kosovo is the smallest country in the Balkans.

The name Kosovo is derived from a Serbian place-name meaning “field of blackbirds.” After serving as the centre of a medieval Serbian empire, Kosovo was ruled by the Ottoman Empire from the mid-15th to the early 20th century, a period when Islam grew in importance and the population of Albanian speakers in the region increased. In the early 20th century Kosovo was incorporated into Serbia (later part of Yugoslavia).

By the second half of the century, the largely Muslim ethnic Albanians outnumbered the predominantly Eastern Orthodox Serbs in Kosovo. To the north and east of Kosovo is the Republic of Serbia. To the south of Kosovo is North Macedonia. To the northwest is Montenegro and to the southwest is Albania. The capital is Pristina. Prishtina is also Kosovo’s largest city. About 1.8 million people live in Kosovo.

The borders of Kosovo are largely mountainous, characterized by sharp peaks and narrow valleys. The Sharr (Serbian: Šar) Mountains lie along the southern border with North Macedonia, while the Kopaonik Mountains are situated along the northeastern border with Serbia. The highest point is Mount Gjeravica (Ðeravica), at (2,656 metres), on the western border with Albania.

A range of hills running north-south through central Kosovo separates the Kosovo Plain in the east from the Dukagjin (Metohija) Plain in the west.

The soils of the plains are among the most fertile in the Balkans and support the cultivation of grains, fruits, and vegetables.

In general, Kosovo has a moderate continental climate, although the proximity of the Mediterranean Sea has a tempering effect, especially in the southwest.

Albanian and Serbian are the official languages of Kosovo.

Since 2006. this Medieval Monuments in Kosovo have listed on the Unesco World Heritage List:

is the capital and largest city of the Autonomous Province of Kosovo and Metohija and represents its economic, cultural and university headquarters. It lies on the northeastern perimeter of the Kosovo Basin, below Mount Gremia.

It is estimated that there are currently over 500,000 inhabitants in Pristina. The majority of the population is Albanian, and other ethnic communities are Serbs, Bosniaks, Turks  and Roma. 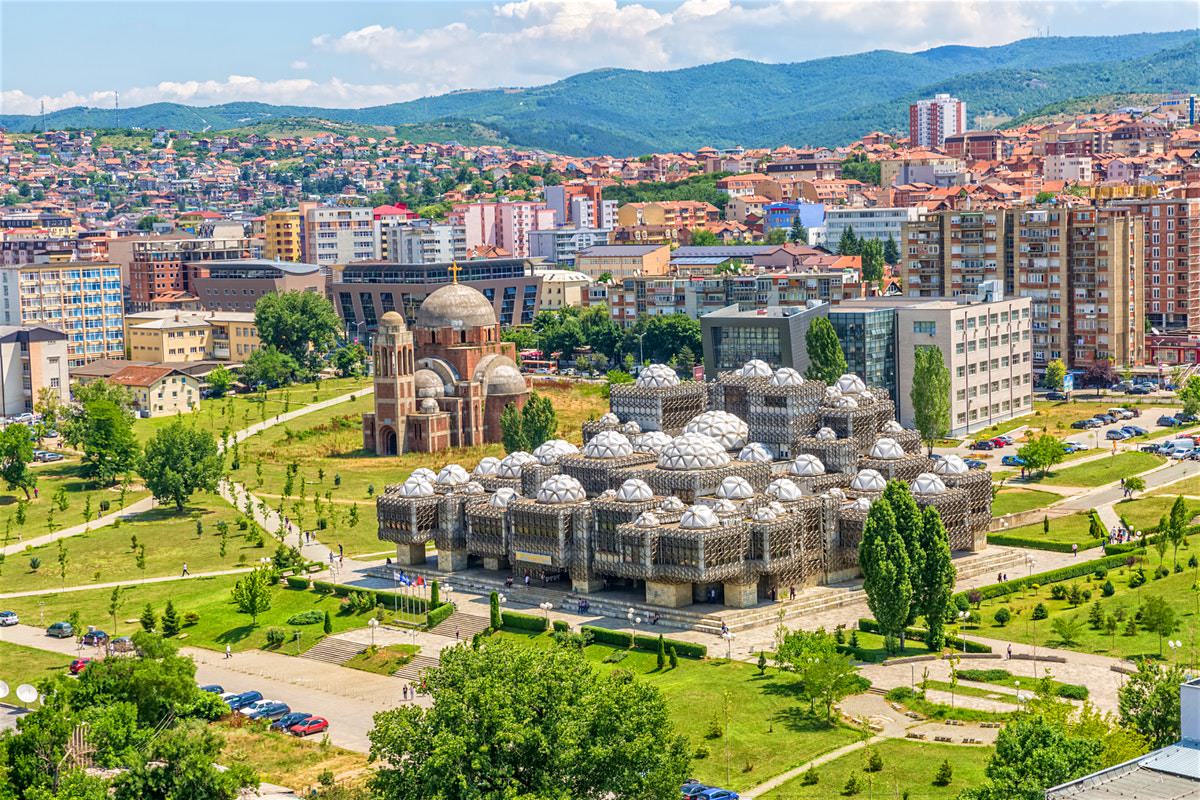 Pristina flourished in the 14th and 15th centuries, when it became a mining and trading center on the Dubrovnik-Constantinople road. For a time it was the capital of Serbian rulers, and during the Turkish rule, Pristina’s importance in economic terms declined, until 1875, when it became the center of Turkey’s Sandzhakat. Pristina was liberated from the Turks in 1912. Until the end of World War II, it retained the appearance of an Oriental city, with small and low mud-and-pot houses. After the war, due to its intensive construction, it gets the appearance of a modern city. Due to the contrast of old and new in architecture and a large number of cultural and historical monuments, Pristina is an interesting tourist spot. From the Turkish period, the most significant cultural and historical monuments in Pristina are the Imperial mosque from the 15th century, the Tash-mosque, the Clock Tower, the Emindžika house, which is a typical oriental rich building from the 19th century, etc. is a monastery complex near Pec, at the entrance of the Pec Bistrica River into the Rug Gorge. It was built from the third decade of the 13th century to the middle of the 14th century, and consists of the main church of St. The apostle, next to which was built the church of Sv. Dimitrija, and from the south the Church of the Virgin Mary with the church of Sv. Nicholas – as well as common external awnings on the west side.

The whole history of the styles of medieval wall painting can be seen on the walls of churches. The oldest frescoes are located in the under-domed area of ​​the church of Sv. Apostle (13th century). Most of the frescoes in the church of Sv. Dimitrija was working painter Jovan, who has a tendency to show details. The girl with the crochet in the picture The Birth of the Virgin at the Altar is known for its classic beauty and grace. The frescoes in the parish have been painted in several periods, from the 14th to the 18th centuries. Immediately next to the entrance is a painted lineage of the Nemanja Dynasty.

In the church of Sv. Dimitria is situated a monastery treasury, with numerous icons, handwritten books and kujung items. The icons come from the oven of an icon painting workshop, which was especially active in the second half of the 16th century. Inside the churches are preserved marble sarcophagi with the relics of the archbishops and patriarchs of Peja, who, due to their sculptural decorations, represent valuable works of art. In 2006 complex was added to the UNESCO’s List of World Heritage.

The ancient monastery of Gracanica, in Kosovo, on the left bank of the river Gracanka, the endowment of Serbian King Milutin, was erected between 1315 and 1321.

Only the church dedicated to the Annunciation is preserved from the medieval monastery complex. It was erected in 1321, as the endowment of King Milutin, in the form of a five-domed building with a base in the form of an inscribed cross and façades of alternating rows of brick and stone.

The Gracanica frescoes were painted by Greek masters from Thessaloniki, famous Mihajilo and Evtihia, who completed their painting in 1321. They are well preserved and belong to the narrative painting characteristic of Serbian and Byzantine art of the first half of the 14th century. Compared to the frescoes of the previous century, the compositions are smaller and the motifs more varied, including scenes from the life of the saints and the church calendar. In Gracanica, for the first time in old Serbian painting, a genealogical line of the Nemanjić dynasty was painted, with 16 portraits and at the entrance to the church there are portraits of King Milutin and his wife Simonide. Her damaged eyes inspired Serbian poet Milan Rakic ​​to write one of the most beautiful poems in recent Serbian literature. In 2004 Gracanica Monastery became a part of UNESCO’s heritage. 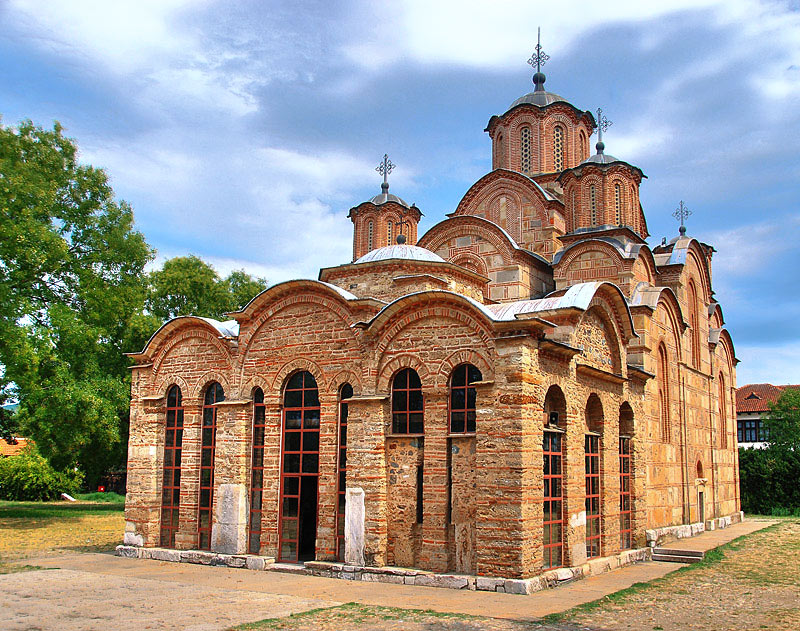 Along the Bistrica river, under the steep slopes of the Prokletije mountain, in a place of beautiful and wooded, water-soaked waters, the Holy King Stefan founded the Convent of Christ the Savior, the most magnificent endowment of a rich non-Germanic spiritual and architectural heritage. An important part of the historical memory and spiritual identity of the Serbian people is deeply embedded in its marble walls, magnificent murals and sculptures.

Dečani possesses a unique church constructed in a mixture of Romanic, Gothic and Byzantine styles.

We learn about the king’s monastery property and the construction and organization of the Decani monastery from numerous literary medieval writings. We also know from a multitude of documents and records in Serbian, Turkish and other languages, the later fate of the monastery, which was almost constantly attacked and plundered, then restored and donated, and which, despite the most difficult temptations, remained a living witness to the bloody history of the Balkans.
The monastery was written to the list of World Heritage Sites in Europe in 2004.